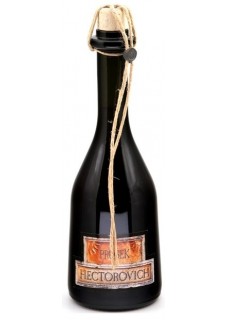 Relative of the Italian Vin Santo and several other top quality Mediterranean sweet wines, Prošek originates in the coastal part of Dalmatia and Istria, which are also the only two regions where it is still made.

Produced the traditional way, Prošek Hektorovich is the product of carefully picked more mature grapes with some dried grapes intermixed, grown on specially selected locations, which are then dried on straw for up to a month. The resulting wine is irresistibly sweet, with the ripe aromas of raisins, dried fruit and jam…

Prošek Hectorovich was named after Petar Hektorović, a great poet, hedonist and nobleman who came from the island of Hvar.