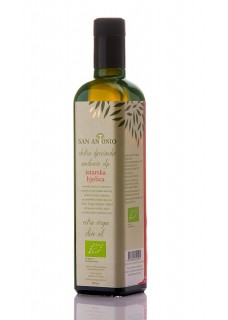 Istarska Bjelica is intensive olive oil, rich in flavor, distinctly bitter and spicy, with a strong scent of the grass and leaves. The traces of almonds and tomatoes are reflected in the scent, giving the Istarska Bjelica distinctive touch.

Stancia "San Antonio" in Vodnjan, Istra, is established in 2008, while the first olive trees were planted in 2009.  Today on this lovely estate there are 7000 olive trees from different species like Buža, Karbonaca, Bijelica,
Leccino and Pendolino. Olive plantation is on 100-200 meters altitude and 800 meter from the sea. Every tree have its own irrigation 'drop by drop', which is essential for quality of olives.
In 2014. stancia "San Antonio" bought new oil plant for pressing oil with separation units, and is one of 5 in Europe, and the only one totally new in Croatia. This is why they produce only extra virgin oil of highest standards. It is produced only by mechanical way on temperatures no higher of 27 Celsius . With this new technology there is more green colour, more polifenols so essential and crucial for oil taste, and it also lasts longer.
After pressing their oils, they are immediately filtrated (in order to separate the last organic residues that could spoil the oil) and put in tanks without any oxygen presence. So prepared "San Antonio" olive oil have from 0,10% up to 0,20% free fat acids, much less than the maximum allowed percentage of 0,80.
This all is the reason that "San Antonio" olive oils have 3 Gold and one silver medal on world olive oil exhibition NYIOOC in 2013, 3 gold medals from Expo in Milan te same year, than gold and silver on
extra virgin olive oils in Tokyo Japan in 2015.

One of the best Croatian olive oils, and now on Croatianwine.eu.