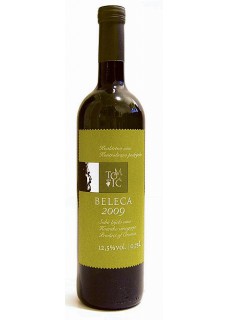 The name of the wine means "beauty" in vernacular (Ital. bellezza). Beleca wine is the first blend of Pošip and Bogdanuša. Originally from Korčula, Pošip has taken root in Hvar as well, and has recently become popular on the international wine scene as one of the most praised Croatian grape varieties.

Bogdanuša, as an autochthonous Croatian variety, is planted on red soil which gives it a specific refreshing sour taste, which is why it pairs excellently with Pošip. In that synergy, each of the varieties provides its best: Pošip provides the strength, the typical fruity and floral varietal aromas (of apricot, peach and other fresh fruit) and minerality, while Bogdanuša provides the gentler floral aromas and freshness.

Food pairing: white meat, fish and shellfish dishes, as well as to more spicy dishes such as pesto, hard cheeses...